Whoa! Whale sharks in the Lhaviyani! 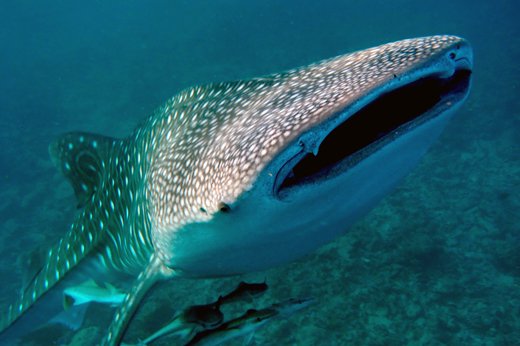 As many of you will know, the elusive whale shark is an extremely infrequent visitor to our waters, so when we heard a rumour that some of them had been spotted on the outreef at Kanifushi we immediately filled a boat with divers and headed down there!

You can imagine how happy we were to come across a couple of them patrolling up and down on top of the reef before diving down into the blue and we immediately jumped in with them!  We were really hoping that it wasn’t a one-off so we went back the next day to have another look….and there they were again!  Needless to say, for the next 2 weeks we were down there snorkeling and diving every day hoping to catch a glimpse of these gentle giants.

We were fortunate enough to encounter them on many occasions and the photographs our guides, instructors and guests managed to take were forwarded to Guy Stevens, a marine biologist friend of ours who keeps a database of whale sharks seen in the Maldives as part of his research project funded by the Save Our Seas Foundation.  It turns out that we didn’t find just two or three whale sharks – we actually photographed eight separate individuals!  Seven of these are new to his database, whilst one had previously been sighted in 2008 and again in 2009 at the Marine Protected Area of Hanifaru Bay in the Baa Atoll to our south west.

Maybe they have been visiting the area all along and we’ve been looking in the wrong places!  Maybe they were lost and came here by accident!  Who knows?  But we will definitely be looking on the outreef more often now, so let’s hope this is the start of something beautiful…..