What’s that coming over the hill?! 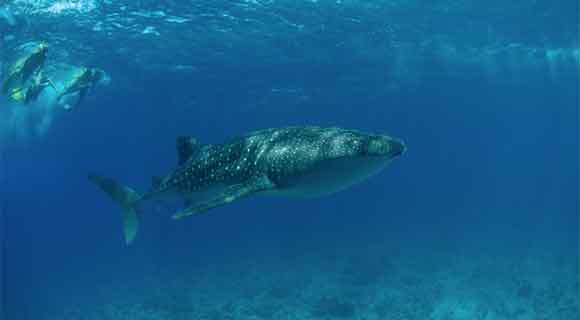 What seemed like just another Sunday morning on Kuredu, turned out to be a tremendous highlight that finished off the week for everyone lucky enough to be snorkelling with Wessel at Kuredu Caves that day with a giant smile on their faces!

Here are some notes from Wessel’s snorkelling diary:

I took my guests on a half day snorkelling trip to Caves this morning. Conditions were very calm, flat, almost mirror-like water all around the island. Observing the ocean from the boat, visibility appeared excellent, we could already see a few turtles swimming up before they even reached the surface to take a breath.

About halfway through the Caves area, which even after having been there several times per week since my arrival, still remains one of my favourite snorkel and dive sites in the Lhaviyani Atoll, I spotted something strange coming up the reef. An unusually big silhouette, even for Caves where there’s regular sightings of eagle rays, napoleons, sharks and of course giant turtles. But this appeared bigger than all of the mentioned by and large.

When the mysterious creature was at about 10 meters, with great visibility, we could easily put a name to the smiley face. It was – pardon my French – a freaking whale shark! I called the guests closer so everybody could see what swam underneath us. It was a very young one and measured about 3 meters, though still big in comparison with everything around us – and us! After it passed us, it came up even shallower to a depth of about 4 meters. We tried to keep up for a while, until the gentle giant of the ocean slowly faded out of our sight.

So next time you see a massive creature coming over a coral hill underneath Kuredu, it’s rarely a monster. More likely it’s a mammoth fish, the biggest one in the ocean, with gigantic mouth that isn’t going to gulp you though – unless you’re plankton!