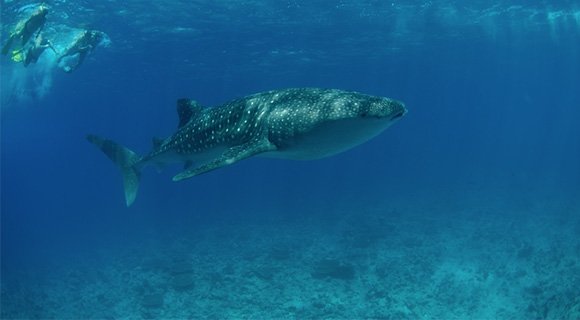 On Sunday this week, our divers at Lily Beach headed out full of anticipation for what was to be a great day of diving and snorkelling with the largest fish in the ocean – the whale shark.

With Atheef and Lilly on the boat, they planned a day of searching along the very southern stretch of the outreef in the Ari Atoll. The divers were already impressed when Atheef spotted the first whale shark shortly after the first dive of the day. The dive itself wasn’t boring by any means – white tip reef sharks, turtles, nudibranches and big schools of fish were all on display at Dhidhoo Beru. After the snorkelling, Atheef decided to try their luck at Dhidhoo Finolhu Beru and the group were rewarded with a sighting almost immediately and then with a second one at the end of the dive.

An awesome day for Lucy, Andrew, Akemi, Osamu, Laura and Paul. Oh, and of course for Lilly and Atheef!