During the last week the Prodivers teams on Kuredu and Komandoo have been involved in the rescue of sea turtles that have become entangled in discarded items drifting in the ocean. This time of year sees an increase in the number of turtles requiring help and it’s due to the North-East Monsoon bringing floating debris from the Bay of Bengal.

During an excursion, the Kuredu team saw a struggling turtle that was entangled in plastic. The large Olive Ridley had sustained injuries from her ordeal and after being assessed by Stephanie, the resident Sea Turtle Biologist at Kuredu’s Marine Center, required transfer to a specialist vet working with the Olive Ridley Project at Coco Palm Dhuni Kholu in Baa Atoll. The turtle, lovingly named “Burrito” by its rescuers, was taken straight to the operating table to have her wounds treated. Unfortunately the left hind flipper was too severely damaged to be saved and had to be amputated. Claire and one volunteer veterinary surgeon at the centre did their best repairing the neck and left front flipper. Burrito woke up from surgery and started feeding. Now everyone is keeping their fingers crossed that she will heal and regain function of her front flipper! 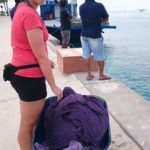 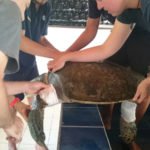 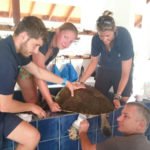 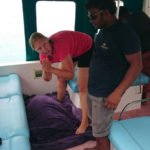 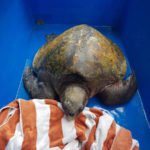 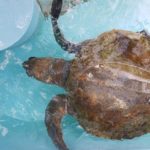 Just a couple of days later the Komandoo Prodivers team were taking the resort staff on an trip to see mantas at Danifaru when Marek and Ibbe spotted two Olive Ridley turtles trapped in a floating ghost net (a lost or discarded fishing net drifting through the ocean). Once everyone had helped to lift the turtles out of the water, Imad cut them free. One of the turtles was able to be released straight back into the ocean, the other appeared injured so was taken straight to the Marine Center on Naifaru to receive the necessary treatment. 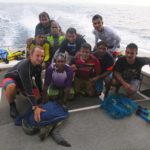 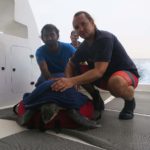 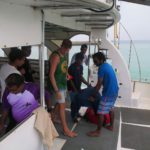 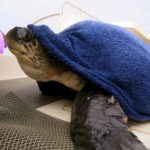 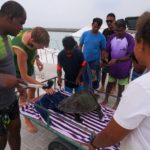 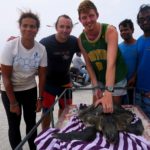 Well done to both rescue teams! The turtles that everyone loves so much are in safer hands with they great rescue work being carried out by those in the water.

The work of the Olive Ridley Project is a key part of Sea Turtle conservation in the Maldives, educating both guests and staff, caring for injured turtles and analysing the origin of the nets removed from the ocean. Every piece of plastic and netting removed is a potential lifesaver for the world’s endangered turtles. So, no matter where you are, if you spot a ghost net, please report it or, if safe to do so, remove it – you may be preventing the needless harm of endangered sea creatures.

Thanks again to our teams on Kuredu and Komandoo, and the Olive Ridley Project for the latest rescues.