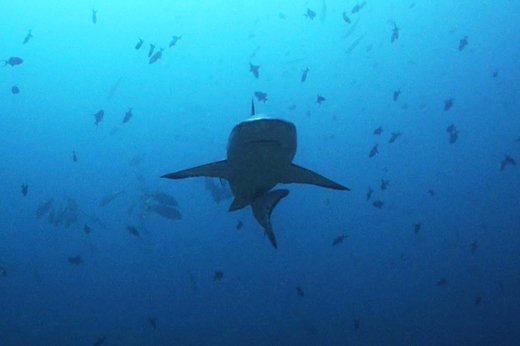 Our arrival at the famous Orimas Thila in the Noon Atoll was greeted by schooling batfish, curiously breaking the surface and swimming sideways around the boat to get a closer look.

Full of anticipation we jumped into the water, and as soon as everybody settled down, the sea rewarded our early morning departure: a bunch of grey reef sharks, from half a meter up to two meters came out of the blue to check us out – closer and closer – circling around right in front of us, “standing up” and opening their mouths to get cleaned…

Check out the latest movie update to “The Last 7 Days…On Kuredu” to watch what has to be one of the most unwanted jobs in the ocean!

Naturally, we decided to hang around and didn’t move the whole dive, just waiting and wondering how perfect a day can be.

It’s always an amazing experience to see such a spectacle of nature.

But even though everything looks so untouched and intact and the Maldives make effort possible to protect their environment and banned shark fishing in the entire region in 2010.

The unfortunately truth is, that nowadays even these grey reef sharks are a near threatened species. 30% of all shark species are threatened with extinction due to the massive overfishing and weak to non-existing rules and controls governing shark catches and international trade.

In the last 30 years the global shark population has decreased by more than 80 % and still 100 million sharks get caught every year. With these alarming statistics, and without any concrete actions we might lose one of the most important predators on earth that keeps our fragile ecosystem in balance and support life in the oceans and on land.