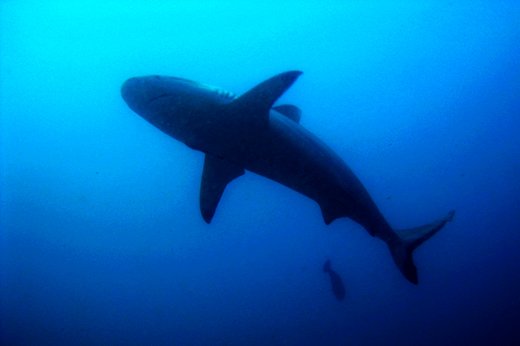 In light of the forthcoming Shark Week, aimed at rising awareness about sharks and the importance of their conservation, we are pleased to report the sighting of a very heavily pregnant grey reef shark on Kuredu Express!

Divers, guided by Tuuli and Jutta, were excited about the sharks’ natural curiosity, as all six of the big grey reefs lingered around the divers for a long time.  Even more amazing was the size of the sharks, and as they came closer, it soon became clear that one of them was pregnant!

The prospect of shark offspring is fantastic news! The effects of removing sharks from the ecosystem for commercial purposes are highly damaging. Contrary to common belief that sharks are ferocious beasts, the fact is these creatures, who serve as top predators at the pinnacle of the marine food pyramid, play a critical role in our ocean by regulating its natural balance. Tens of millions of sharks and closely related rays are killed each year by fisheries, either intentionally or as bycatch; too often their populations are being fished faster than they can reproduce.

We’re hoping that our Shark Week will contribute to a better understanding of these creatures and we’re keeping our fingers crossed for more encounters like this!

Barbara, our staff member, is certain that she’ll remember the magnificent dive and the encouraging sighting long after the sharks have forgotten her!