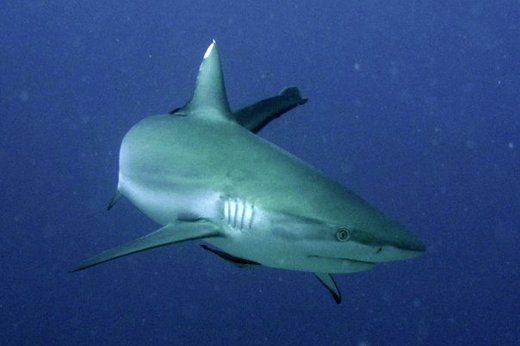 As another successful Shark Week Special comes to an end, we thought we would take the opportunity to give you an update as to how it has gone… Over 60 sharks and over 20 rays. In just 6 dives…

As with last years event, we were aiming to see a ‘Shark or Ray Every Day’, as well as increase the awareness of the current situation of shark populations.  Needless to say, there were some great encounters during this 6 dive special event.

The evening before the first dive all the participants were welcomed by Muin, who gave a short presentation concerning some basic shark information – behavior, anatomy and reproduction.  This session was followed up the next morning with a trip out to the reliable Kuredu Express.  Muin clearly enjoyed the pressure, with 6 grey reef sharks and an eagle ray ensuring we didn’t slip up on the first day!

Keen to get the most out of the weeks dives, Muin organized a scooter introduction dive for the participants.  The plan being to use them for the dives later on in the week.

The next day the group went out for 2 dives in the morning.  After the large number of sharks the day before, it was going to be hard to top. KFFC was picked for the first dive. With their scooters ready, the group blew the previous days sightings out of the water! 16 eagle rays, about 15 to 20 grey reef sharks, 2 mangrove stingrays, 1 feather tail sting ray and schools of barracudas and big eye travellies.  A more relaxed Latheef Reef for dive number 5 was much appreciated after all the excitement of the first.

The final dive was again with the Scooter (the group couldn’t get enough!).  With promising conditions on KFFC, the group came across 10-15 baby silver tip sharks and 10-15 grey reef sharks cruising along the edge of the channel.

It wasn’t all fun though as the group returned to Kuredu.  The final part of the week was designed to bring back home the fact that these incredible creatures are in serious need of our help.

Tens on millions of sharks are caught globally each year.  Although the shark fin market in Asia is one of the most lucrative for fishermen, European markets are also large consumers of the meat and other products.  Spain is one of the largest exporters of shark fins to Asia.

The European Union banned the finning of sharks in 2003, but loopholes in the law have allowed fishermen to get around the prohibition. The UK based Shark Trust, who are one of the driving forces behind the European Shark Week initiative are pushing for these loopholes to be closed.  More information relating to this cause can be found on their website, together with an excellent “European Shark Guide”.  If you would like to pledge your support, there are also instructions as to how to do so.

We want to say a big “Thank you” to all of the Shark Course participants!  Keep your eyes out for future events!