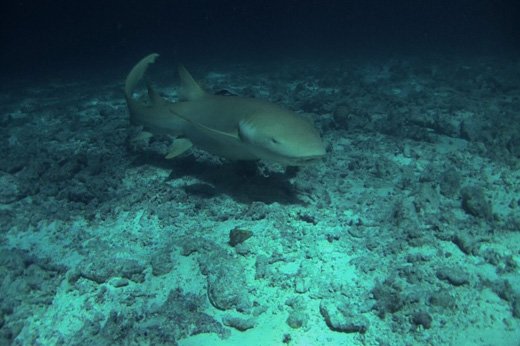 The past few weeks has seen regular sightings of 2 Nurse Sharks patrolling the waters around Sai Kotari at the end of the Kuredu jetty.

After checking out from the surface what was going on during these night time rituals, we decided that the time had come to jump in the water and find out more about what was happening beneath the surface.

After rigging up a set of powerful lights on the side of the ‘Native Dancer’ boat, we took the video camera into the water to see if we could capture some of the nocturnal activities of these normally shy sharks.

Nurse Sharks generally hide themselves away during the day, preferring the protection of overhangs and small caves to rest.  During the night time hours though, Nurse Sharks hunt and use their developed sensory system to find their prey.

Nurse Sharks have 2 ‘barbels’ that hang in front of their mouths which they use to smell and taste the water.  It is these barbels that help them to locate food which is normally lying in small holes in the reef itself.  They normally feed on small fish or invertebrates such as shrimps and squid.  Once they find their food, they are able to ‘suck’ their prey out of its hole with their mouths.

Check out the movie footage in this weeks ‘Last 7 Days…On Kuredu‘ installment.  Look closely at the way the Nurse Sharks swim close to the ground, using their barbels to smell out their prey. The footage also shows some other bottom feeders that were also curious as to the lights we had set up.