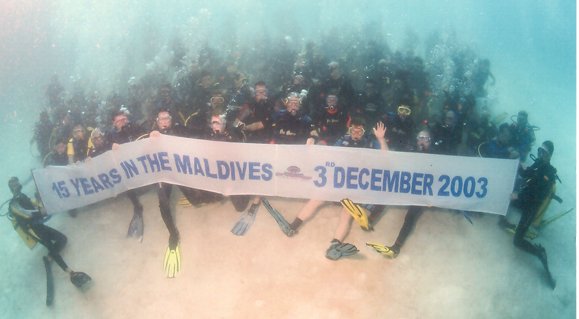 We’ve fallen a little bit behind with our anniversary postings so it time for a catch up. Following the birth of the new millennium, and those first few eventful years after, Prodivers continued to grow and prosper throughout the rest of the naughties (2000-09).

With Ray still base leader during the early part of the new millennium a number of big changes were seen around Kuredu. The Water villas were first constructed in 2002, and  later in 2005 The O Resort, and its villas were also added to the island, bringing the total number of rooms to 373, and giving Kuredu its modern day feel!

In 2003 the last of the passenger boat transfers took place, and Kuredu became a Sea Plane only island, with the 40 minute flight from Male often becoming a highlight for many of our guest’s holiday, especially on their first visit.

However it is 2004 that stands out most during this time. In 2004 Ray moved up, and became regional manager, helping Staffan with the running of all the Prodivers in the country and Bernd Müller became Kuredu’s base leader. It was also in 2004 that the Boxing Day Tsunami devastated much of the Indian Ocean… Keep checking back this week to find out more!