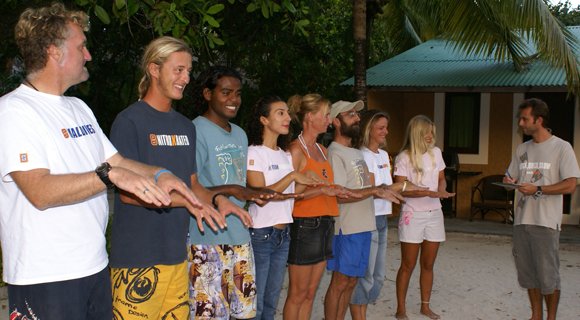 Following the Tsunami of 2004, with the continued expansion of Kuredu (as well as the water villas built in 2002, 2007 saw the construction of the islands Sultan pool villas) Prodivers continued to flourish on all three islands.

In 2007 PD became involved with a government initiative to help set up some resorts in the south on the island of Herathea, located in the south of the country in the Addhu Atoll.

The aim of the project was for Prodivers to lend its expertise in the running of the dive school during the resorts first year of operation. The resort would then be taken over by the state, as a way of generating income and jobs for the local community.

Bernd Müller, spearheaded much of the work from Prodivers, with many of the team at the time contributing and spending time in one of the less explored atolls.

Over the year, working with the other partners at the resort PD was able to provide many insights and advice in to the running of a successful resort and dive base in the Maldives.

Next week we will look to move into the modern era (2009 onwards, and the period where I actually know many of the staff, and guests personally).