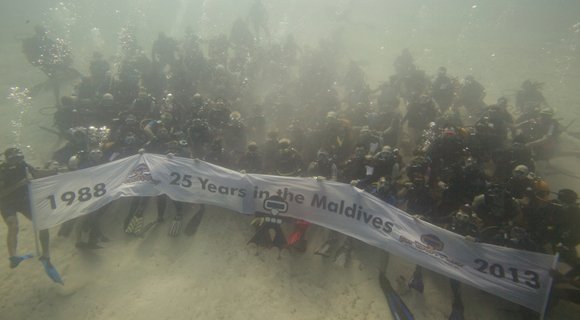 Last week we celebrated Prodivers 25th anniversary operating in the Maldives, something we have been keeping very quite about for the last 12 months…. On Wednesday we took all of our divers to Bodu Giri for the big anniversary dive, with 93 divers in the water, and Ray determined to get a photo of everyone it took a lot of organisation, but was a lot of fun, and we hope all of our guests enjoyed themselves as much as the staff did.

Following the big photo shoot everyone was able to go out and enjoy a dive on one of our most famous sites. Despite having 90+ rowdy divers in the water we were still visited by manta rays, turtles, sting rays, ribbon eels and morays during the event, not to mention the  hordes of reef fish that are commonly found around the site.

For our non divers we also held an anniversary snorkel treasure hunt on Aquarium, where fantastic visibility, manta rays, eagle rays and turtles along with chests of buried treasure meant a good morning was had by all. The event also saw over 3000 rf. donated to the Atoll challenge event.