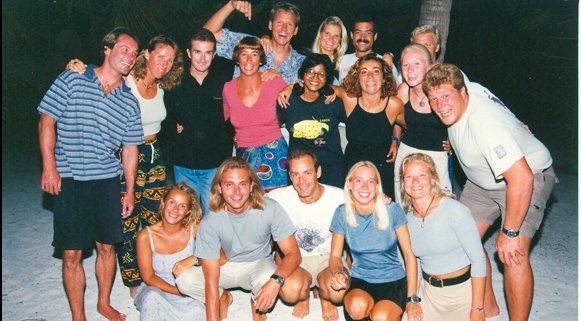 It’s been a while since the last post looking back at how Prodivers has developed over the last 25 years (I went on holiday….) so its time for a quick recap, and a look at the year of 1999. By 1999 Prodivers was operating in its current form, with three dive centers running across the Maldives, on Kuredu, Komandoo and Vakarufalhi, with Komandoo opening just the year before. Having been running since 1988 it had been in action for over 10 years and already built itself a reputation for offering great diving and great service, and as a reward built up a large number of repeater guests who liked to visit one or more of the dive centers every year or so (if you are one of those guests we would love to hear form you!)

With a permanent in house videographer, multilingual instructor team and a dedicated snorkel section, Prodivers was working towards becoming the complete dive operation. The resorts around Prodivers were also developing. Kuredu now 11 years old had expanded to have 300 rooms, Komandoo recently opened still felt shiny and new and Vakarufalhi was a modern resort which provided our gateway to the South Ari’s wonderful coral reefs and amazing fish life.

However in 1998 The El Niño caused widespread damage and coral death across the region and many of our top dive sites suffered. Although the damage was sever (95% of the countries reefs affected) by 1999 signs of recovery were already in place and new coral growth could be seen. 1999 also saw some big changes in the staff team. Perhaps the biggest of all was the departure of Kimmo. Kimmo who had joined the team in ’89 had been the base leader for the previous 5 years on Kuredu and seen many changes under his leadership, along with Kimmo’s departure we saw some new faces join the team, including Rosa and Joesph who are still with us today running the show on Komandoo, and many of you would have had the pleasure of meeting over the last decade or so.

We’ve also upload the latest pictures from this time to our Facebook page, and as they show Prodivers continued to feature heavily in the entertainment on Kuredu, and the other islands, and along the way we made many great friends!