What’s rarer than a Whaleshark….?! 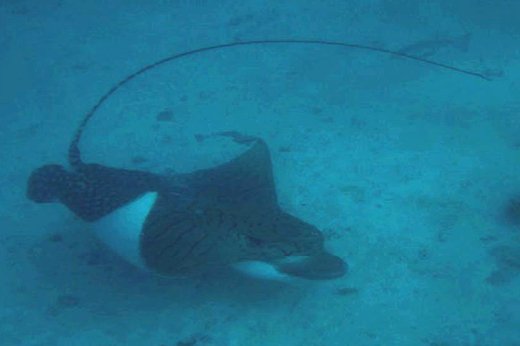 Aquarium is well known for its occasional encounters with guitar sharks, but Wednesday afternoon was something special. After 40 minutes looking for these elusive rays two of our staff were approaching their limits and having to admit defeat in their search.

As they started to slowly ascend, Anna from our office team spotted what she thought was a manta approaching the base of the wall and called Benjamin, one of our snorkel guides, to come and have a look.  As they swam towards the ray it became apparent that this was no manta; they had come across a rarely seen ornate eagle ray.

With a wingspan of approx 2.5/3m and a tail even longer, it was very fortunate that Benjamin was carrying his camera and able to capture this beautiful creature as it hunted about in the sand looking for its prey.  It took absolutely no notice of them and they managed to spend a few minutes with it before it disappeared into the blue leaving two absolutely speechless but extremely happy divers!

Hope you enjoy the video clip.