It was another glorious, sunny Maldives morning in the Lhaviyani Atoll– Komandoo Prodivers were out on ‘Haleema’ Dhoni, heading towards the next dive site, when Instructor, Sally, spotted a big lump of floating ghost net. Captain Ahmed quickly turned the dhoni around ready for a simple retrieval of ocean trash.

On getting closer, however, everyone on board noticed the mass of rubbish had disappeared beneath the swell – but only for a moment. It re-emerged at the surface and they could see the helpless flapping of a turtle trapped amongst the trash. Scared by the boat, the turtle had tried to dive down with the massive tangle still attached, only to be buoyed back to the surface by the half dozen empty water bottles that helped keep the mess afloat.

Sally grabbed her mask and fins, waiting for the signal that she could jump in, dive knife in hand, to cut the turtle free. The trash pile was about four times bigger than it had looked on the surface – and this poor turtle was wrapped in it around every fin, its face and neck, and even its little tail. Being careful not to get entangled in the net herself, Sally started hauling it back towards the boat, where Instructor, Marek, the boat crew, and guests were poised to help.

The turtle was their first priority; Sally passed it up to Marek and Abdulla from the boat crew, and they got to work tenderly cutting away the strings. Everyone else helped to pull in the rest of the bulk, which was made up of a dozen different ropes, netting, fishing lines, water bottles and fishing lures.

With the turtle finally free, they could see she was an Olive Ridley, but they also saw that her shell was badly damaged. The decision was quickly made to take her to the Atoll Marine Centre on the capital island of Naifaru. Back at Komandoo, the team re-wrapped her ready for her own private speed-boat with Captain Ismail to the Atoll Marine Centre where the Marine Biologist, Zoe, was already preparing for her arrival. Prodivers team Steffi and Aslam arranged the boat with Afiz, and made her even more comfortable by placing her on a large snorkel buoy to absorb the movement of the boat.

At the Atoll Marine Centre, the little turtle (now named Nikki, though it’s a little more like Nippy!) is doing well – she was dehydrated and open to infections and sunburn from the scratches on her shell. She will have some time to relax and recover, and have plenty to eat to regain her strength, before her eventual release back into the ocean.

Prodivers would like to thank the Komandoo team, the boat crew, and all the staff at the jetty that day. Thanks also to the team at the Atoll Marine Centre who are looking after Nikki. Finally, a big thank you to the dive guests who patiently put a scuba dive on hold, helped, and recorded the rescue. Nikki wouldn’t be here without the quick thinking and compassion of all involved. 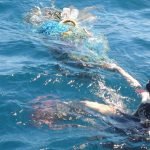 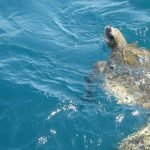 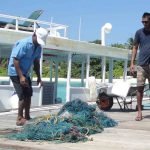 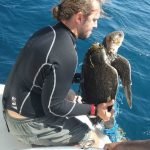 Thank you to Thomas and Theresia for the lovely photos.