On 30th August Prodivers welcomed Shameel from the Olive Ridley Project. Shameel gave a very interesting presentation about the turtles around Kuredu and about the Project’s achievements.

Shameel explained that there are an insane number of fishing nets floating around in the ocean. Fishing with nets is not allowed in the Maldives – they have travelled from elsewhere, entangling marine life on their silent but deadly drift through the ocean. Many turtles get trapped in those nets and either get badly injured or die. The Olive Ridley Project tries to prevent the problem of floating nets with education in the countries they originate from; they also help the entangled and rescued turtles to recover. A huge success for the Olive Ridley Project recently is that there is a brand new law in the Maldives making it illegal to keep turtles as pets. 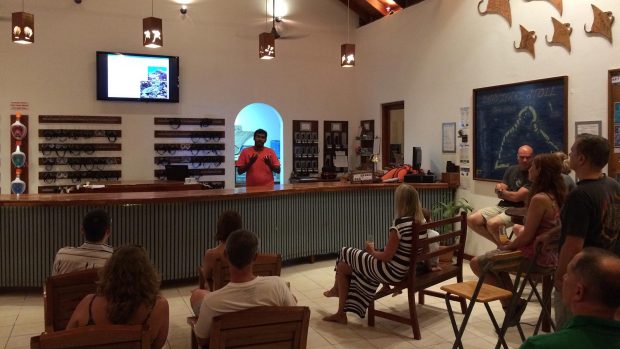 The next day Shameel , along with Snorkel Guides Nika and Saoirse, took 7 guests on the Caves Snorkel Boat. The group spotted 3 of Kuredu’s big Green Sea Turtles; one of them was sleeping, the other two made their way up to the surface to breathe. One of them was about 1.5 meters large! As well as turtles they saw a huge number of schooling fish.The guests were really impressed by the turtles and were eager to see more and to spread the information they learned during the presentation. More snorkelling in the Kuredu Lagoon was planned by the guests who were very keen to find more turtles as soon as they could.

What an awesome turtle environment Kuredu is – one the guests say they would like to visit again as soon as possible.

Prodivers would like to thank Shameel and the Olive Ridley Project for the fascinating presentation and educational snorkel tour, and also for the great work they are doing to help the turtles.