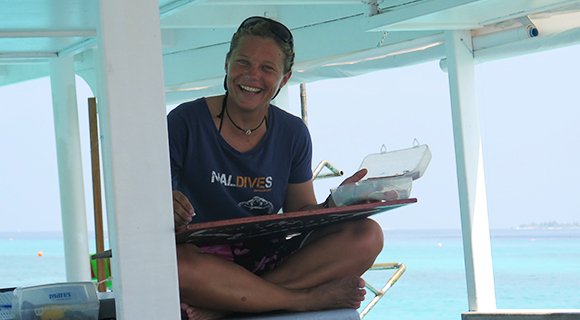 Exciting times are ahead for Prodivers Maldives! We’re opening our fifth dive center on 1st of December, and we’ve put Hannah in charge of the team at Hurawalhi; also, it is with great pleasure to let you know that Prodivers’ first and largest dive center, Kuredu, will be managed by Karola van Biljon.

Karola first joined Prodivers in April 2009 as a member of the office team. Without much hesitation, she let go of her short-lived relationship with paperwork and moved over to the snorkelling section where she could live out her Maldives’ underwater fantasies more. During her first two years on the island, she shared her passion for the ocean with thousands of snorkellers and trained many new staff. Despite enjoying her time on the island a lot, Karola decided to leave, but we somehow knew we’d see her again – and there she was, one year and three days later. In October 2012, Karola completed her IDC and started working as an instructor a month later.

Karola is an experienced instructor and an important part of the Kuredu family, so please join us as we congratulate her on the promotion and wish her all the best at running the dive center.

Helping Karola with her day-to-day tasks will be Ludwig Hofmann as our new Assistant Dive Center Manager, with Sabine being given more time to keep the various bits and pieces of the office, shop and equipment stock running in her new position as Office & Purchasing Manager.