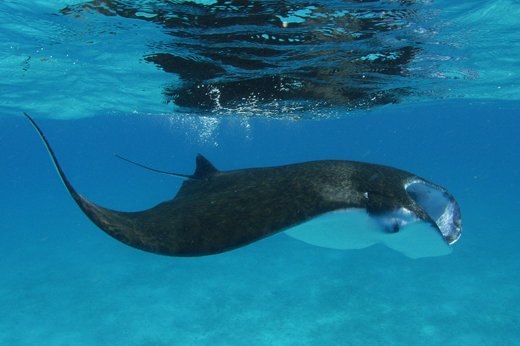 114 Manta Rays have now been spotted in the Lhaviyani Atoll!  As the research continues into the habits and behaviors of these majestic creatures, we are pleased to present to you with the first set of results from the sightings that we have been logging since we first got involved in the Maldivian Manta Ray Project, just over one year ago.

Following on from the Launch of our Manta Ray Specialty Course, the identification project jump started into action, with numerous sightings of Mantas across the atoll.  After comparing the photo id’s of the Mantas against the extensive database of 1,600 individuals currently logged in the Maldives, we were pleased to see that in January alone 16 new individuals were spotted.

We would like to thank those of you that submitted images of Mantas that were taken while you were either diving or snorkeling with us over the past few months, helping us to identify these new individuals, and to record 17 re-sightings of mantas that were existing in our records.

We would like to introduce you to a few of the Manta Rays spotted in January:

We have now seen ‘Vito’ 3 times, all of them at being at Danifaru. Vito is still a juvenile, complete with the long tail associated with youngsters.  She was first spotted in the Lhaviyani Atoll in 2006.

Vernon made a surprise appearance at Gavirifaru Outreef in January.  Our only sightings of Vernon have been while feeding. Vernon was first spotted in March 2006.

Edwina popped up again in January this year after we first spotted her in October 2008.  Each time we have seen Edwina, she has been feeding at Danifaru.

As the research continues, we will keep you updated as to the progress as well as the key findings that emerge.  In the meantime, we would like to take this opportunity to thank those of you that have participated in the course, helping us to pass on what we have learnt about these incredible creatures and help ensure that these populations are respected, managed and preserved for many generations to come.