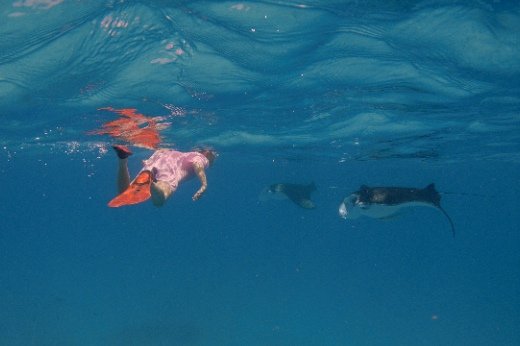 With the latest set of Manta Ray sightings having been analysed, we would like to introduce you to 3 more individuals that have appeared around the Lhaviyani Atoll in the past few months.

These individuals all have a story to tell.  Meet one of the most frequent visitors to the Atoll, as well as one of the Mantas that traveled a long way to get here.

And we would like to ask for your help to name one of these majestic rays, that until a couple of months ago we knew nothing about. Add to their story by leaving your suggestion below.

Hook recently made her first 2 appearance in this Atoll, but is well known to the Research Project, having previously been seen in the Baa Atoll. But these appearances mark the first cross atoll sightings for her. Hook received her name following the cutting loose of some fishing line attached to a hook that was stuck in her mouth.

Feng Shui is the Manta that we have seen the most in the Lhaviyani Atoll.  She is a mature female, and is a regular to the Fushivaru Thila cleaning station, as well as showing up in April and May at Dhanifaru for some feeding action. We saw Feng Shui heavily pregnant in February 2008 at Fushivaru.

This is a new Manta that has burst onto the scene with 4 sightings within 2 months, all at Dhanifaru. He appears to be attracted to Sofia’s though- she has spotted him together with her guests 3 out of the 4 times that he has been seen.

We still don’t have a name for this Manta, and we would like you to change this. Let us know, using the comments box below if you have a good idea for a name.

Just make sure that the name starts with “D”, and as mentioned, this is a young male Manta, so something like “Doris” might not be appropriate!  If we receive a number of different names, we will in fact use all of them, as there are quite a few Mantas that are currently nameless.