After setting foot on Hurawalhi Maldives, guests might not want to stray very far from the luxurious surroundings and if it’s amazing marine life they want to see, they need not stray very far at all – the marine life right here on Hurawalhi’s doorstep is varied, beautiful and about as far away from ordinary as anyone could get. 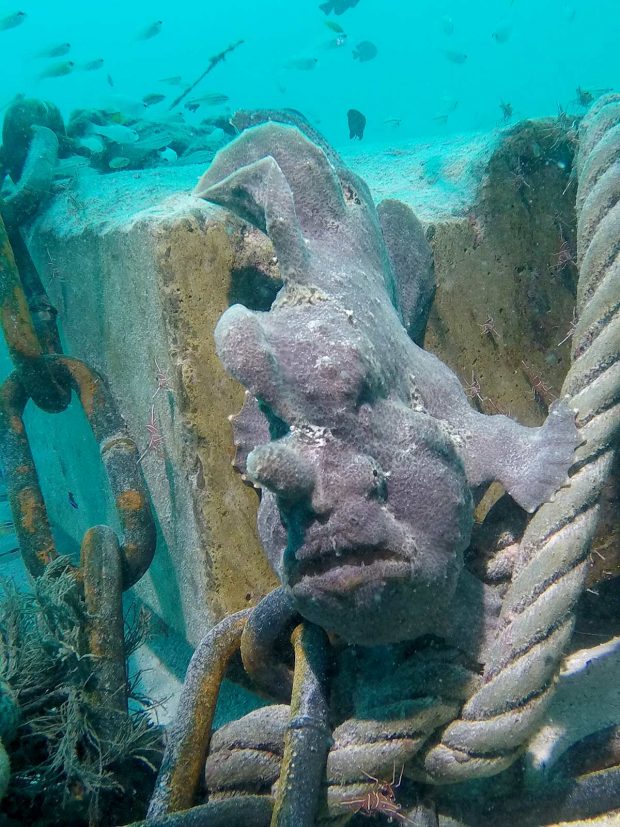 Nudibranches – usually a favourite of keen-eyed divers, on Hurawalhi it’s possible to spot them in the shallows of the sandy lagoon. On occasion upwards of 80 mating nudibranchs can be seen, they are about the size of a thumb, and transparent enough to see their internal organs! Anyone doing a PADI Open Water Diver course, Discover Scuba Diving or simply an Introduction dive has a chance of spotting these fascinating creatures.

Spotted Robust Ghostpipe Fish – look very carefully in the newly-sprouting seagrass of the shallow lagoon and this well-disguised critter may be found – it’s not easy – they look just like a piece of seagrass but they’re not attached to the bottom.

Giant Frogfish – Steve and Mosti found one of these weird but wonderful creatures on a buoy-line just in front of the dive center. Frogfish tend to stay put for a while, waiting to snap up passing prey with their lightening-speed gulp.

Guitar Fish – occasionally seen on a dive site nearby, this strange looking shark treated guests to rare spectacle – it cruised right over 5.8 Undersea Restaurant which is located in Hurawalhi’s lagoon.

Eagle Rays and Mobula Rays – schools of these graceful rays are very often seen swimming along the reef just next to the arrival jetty by our security staff and also during house reef dives.

The usual suspects that can be seen on the House Reef include large schools of snappers, goatfish, moray eels and mantis shrimp. On the top area of this reef guests can see juvenile black tip sharks, angelfish, butterflyfish, and the occasional porcupine stingray.

Schools of fusiliers, schools of rays, napoleons, lobsters, pufferfish, boxfish, parrotfish, and small sharks are very common at The Wall, a dive and snorkel site on the opposite side of the island. The reef is very shallow and It’s easy to access from any of the guest rooms and from the back jetty where there are stairs directly down to the water.
After dark, try a guided night snorkel on Aquarium, the most sheltered reef of the island and get ready to see juvenile sharks, crabs, shrimp, lobsters and even nurse sharks – snorkel guide Mishaah and Appu is really good at finding them! The most magical thing to spot when snorkelling Aquarium at night though is the bioluminescence that shows itself when the water containing plankton is moved. By day large schools of fish including the favourite long-fin butterflyfish can be spotted here.
Get ready to jump in and explore Hurawalhi’s doorstep!