Manta Rays of the Lhaviyani Atoll

It’s that marvellous time of year again when the majestic manta rays grace divers and snorkellers with their presence in the Lhaviyani Atoll. To mark the start of the manta season in Kuredu’s region of the Maldives we’ve gathered together some snippets of information about the Lhaviyani Atoll manta ray population.

The Lhaviyani reef manta ray population currently counts as 323 individuals. 213 mantas are only sighted in Lhaviyani atoll; 110 migrate between atolls. Since November 2016, 12 new individuals have been identified. Reef manta rays M1182 ‘Crusty’ and M41 ‘Feng Shui’ are the most frequently spotted manta rays in Lhaviyani atoll. Feng Shui is a large adult female, which was first identified in 2005 and has been re-sighted a total of 32 times. This manta lady is a loyal one and has never been spotted outside Lhaviyani Atoll. Crusty, on the other hand, likes to travel as far as Ari Atoll and back to Lhaviyani Atoll. The juvenile female was first identified by Prodivers staff in 2008 and also re-sighted a total of 32 times. 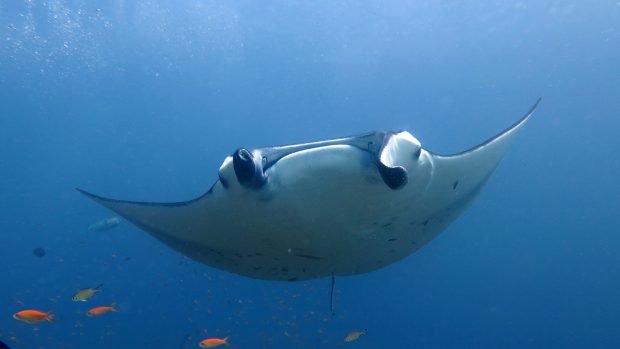 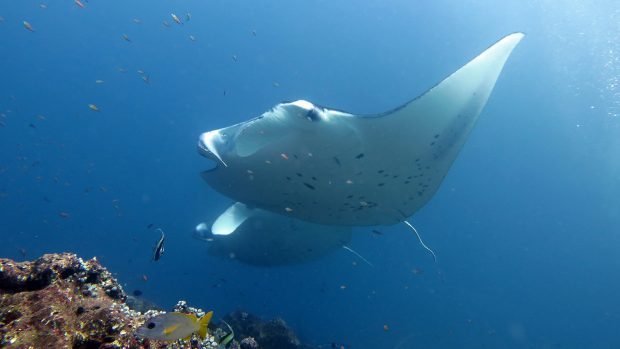 Fushifaru Thila is the main manta ray cleaning station in Lhaviyani Atoll and frequented by manta rays mainly in November and December. At cleaning stations, manta rays hover over the reef to enjoy a cleansing body treatment by small fish, the cleaner wrasses. Did you know? Manta rays spend a lot of their time in deep ocean waters outside the atoll. Even if we do not see them they might be around, feeding on plankton several hundreds of meters deep. Only when their food is more abundant in surface waters, manta rays come up from the depths to feast with mouths wide open; making encounters with those gentle giants even more special!

A big thank you to Lisa Bauer, Resident Marine Biologist from Hurawalhi Island Resort, for sharing her valuable research information with us.

The Manta Trust have put together a very useful guide about how to safely swim with mantas without posing a threat to their well-being, please follow these guidelines during your encounters:

Diving or snorkeling with manta rays is a ‘must-do’ experience, one never to be forgotten and here at Prodivers we schedule regular Manta Boats during this special season to give guests the very best chance of seeing them. We are all keeping fingers crossed for many manta-mazing encounters this season!