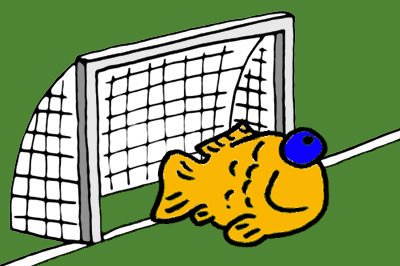 Thanks to its long arms, the Banded Boxer Shrimp is well made for the job as keeper, helped by the fact it can easily reach the corners of the net and stop incredible shots on the goal. It is not so easy to tire them out as they have numerous legs that they can call on – resources some keepers can only dream about.  A youngster that is old beyond his years, the Cleaner Shrimp goalie was born in 1986 and is full of enthusiasm. Playing in the professional leagues since 2005, this keeper was nominated as “Europe’s best goal keeper” in 2008.

Their opponent’s keeper belongs to the family of the Zebra Dwarf Lion Fish that are well known for the aggressive potential of their males. Being aggressive as a keeper is not necessarily a disadvantage as it makes sure that he doesn’t sit back and wait for  the attacks to come streaming in. Attack is often the best form of defence! Despite being relatively small in the goal, this keep is almost unbeatable when it comes to speed and agility. Having played in goal since he was 8, this keeper has over 100 international caps, and brings a wealth of experience to the team.

If young enthusiasm or experienced professionalism will be more important during this game? Maybe we should ask the Octopus…