Surprise encounters for divers and snorkellers at Komandoo

The old cliché ‘expect the unexpected’ is never more appropriate than when diving the reefs of the Lhaviyani Atoll. The Prodivers team at Komandoo Maldives are regularly amazed at the surprises in store once they descend below the surface of the Indian Ocean.

Recently, whilst guiding a dive on Bodu Giri, Steffi spotted an ornate eagle ray feeding on the sandy bottom. The conditions were very good, with great visibility, so most of the divers were able to witness this very elusive ray. Snorkellers have been getting in on the action too – three separate sightings within a two-week period along with footage to prove it! Also known as the reticulate eagle ray, the ornate eagle ray can live for 24 years and grow to have a 2.4m wingspan and total length of 4m. They are very distinctive with patterns or dark lines and rings on its back. This species is considered endangered by the International Union for Conservation of Nature (IUCN) so these were very lucky sightings indeed.

As well as the ornate eagle ray, Steffi had the thrill of meeting a tiger shark at Fushivaru, as well as a large number of silver tip sharks – it’s a dive she won’t forget in a hurry!

A Guitar Shark, a very strange looking creature that has a body shape crossed between a shark and a ray, was spotted by Marek at Felivaru Kandu.

During a trip over to the Fushivaru Marine Protected Area, Sally saw bottlenose dolphins on Kuda Kandu and as if that wasn’t lucky enough, the group saw mantas and, incredibly, a sailfish on Fushivaru Thila. David recently had the pleasure of seeing pilot whales and A LOT of mantas in just one trip! Divers aren’t the only ones in for surprises – Komandoo’s snorkellers have been enjoying incredible experiences with the majestic manta rays too, at Kanifushi Bay – lots of bucket list ticks for these lucky guests.

The more unusual encounters are always big surprises but not always big in size, rare critters including a ribbon eel on Bodu Giri, harlequin shrimps at Gavirifaru, an orangutan crab on Kanihura and a very photogenic frogfish on Tinga Giri have been putting in guest appearances on the reefs too.

Dive in and prepare to be surprised! 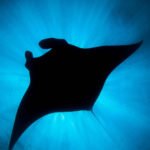 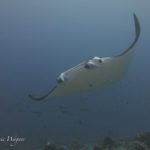 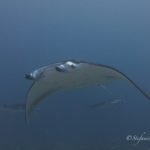 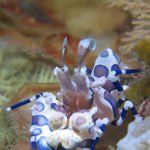 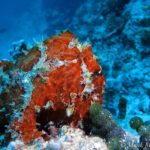 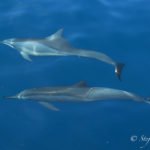