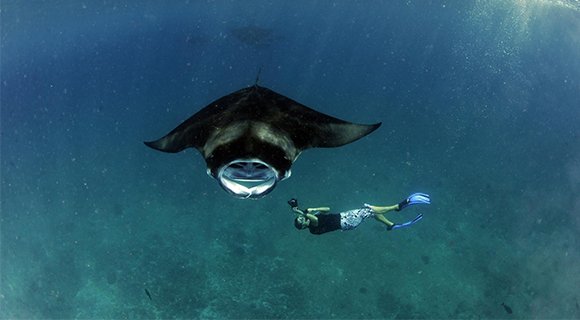 Jon came to Kuredu as a tour rep in 2011, planning on staying on the island for 6 months. He soon came to realize that his excellent guests relations skills and the ability to think on his feet in the most serious of situations (such as dealing with late-night complaints from guests claiming to have a squeaking dinosaur in their villa) could nicely complement his passion for the ocean. So at first Jon joined the office girl team (referred to as ‘the office team’ since), moved to the snorkelling section a year later, and was also entrusted with several project that helped his academic side of the brain stay sharp: he was responsible for Prodivers’ conservation work we carry out with Manta Trust and Olive Ridley Project.

After a 10-month break in New Zealand’s Milford Sound, Jon’s big comeback happened in October 2014 when he was put at the helm of the snorkelling team. Sadly, Jon left us again just recently, this time to try his hand at living a ‘normal’ life in Germany. It might be too late to hold his horses now, but should he ever decide to give Kuredu yet another go, he knows where to find us by now!

Although always busy with keeping the snorkelling section intact, Jon made the time to sum up his fantastic experiences. Below is an excerpt of a much longer article he titled ‘Jon’s History’: