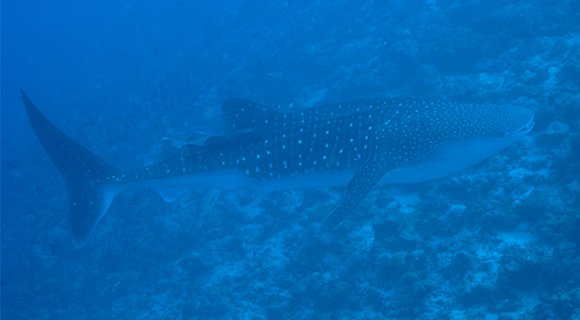 Divers at Hurawalhi Maldives have been in for some astounding treats these past few weeks, especially at Zafari Reef on the east side of the atoll.

Zafari is a dive site that offers a wide range of topography and fish life. It is a site whose beauty is on display at various sections of the reef: there is a beautiful outreef, a corner that goes well into the channel, and a long channel reef that can be nicely admired when we drift past it with the current.

The various reef formations that Zafari consists of result in a great diversity of marine life that resides there. On the outreef divers can find moray eels, especially the attractively spotted honeycomb moral eels, clown fish and octopus. Reef sharks, rays, tuna and napoleon wrasses are regularly seen lingering around the corner. While making use of the current to push us along the channel reef, we often spot hawksbill turtles, and our eagle-eyed divers and instructors regularly find colourful nudibranchs and even the well camouflaged scorpion fish.

In February and March, we regularly visited Zafari Reef as both the visibility and the variety of reef sharks were amazing. Appu’s group returned from the dive, saying they had seen a massive shark, ‘almost the size of a small whale shark, and it had stripes like a barracuda!’ – aha, a tiger shark then!

A week later, during an early morning dive, we also saw a lemon shark; these are big stocky short-nosed yellowish shark species, not seen in our waters all too often.

We’ve saved the best for last: during a relaxed afternoon dive, Janine and her three divers ran into the biggest fish in the ocean and the largest shark species – a whale shark! The giant was within arm’s reach and even did a lap of honour before swimming back into the blue. Luckily, our diver Evelyn took a few pictures of the whale shark, so we have solid evidence to back up the story of our amazing encounter!