Hurawalhi’s Clean Up the World dive

On Sunday 17th September 2017 the Hurawalhi Prodivers team joined forces with millions of other likeminded people across the globe for this year’s Clean Up the World event.

The instructors were joined by the compressor team as well as resort guest, Wayne; they chose the dive site Hinnavaru Outreef as the focus of their clean up effort. As soon as the group arrived at the dive site they saw what they expected, Dolphins jumping in the distance. As they started to set up their dive gear, the dolphins got closer. After watching them for a little while the team jumped into the water to start their dive and, no more than 10 meters away, they saw pilot whales slowly swimming by. Whilst underwater the clean up team could hear the pilot whales singing throughout the dive – they all considered it a ‘thank you’ from mother nature for cleaning up the reef!

The clean up task on the reef was not a difficult one – there was not much to collect. The rubbish they did remove was definitely better out of the ocean though – they found some old plastic bags – these can pose a threat to marine creatures such as turtles who mistake them for jellyfish, as they are one of their major food source, and eat them. Old fishing line and hooks were also found and removed from the reef – this is, to some degree, unavoidable – fishing is a way of life in the Maldives and the hook and line method used is a sustainable fishing method and far better for the reef than using nets which have the inevitable issue of by-catch – dolphins, sharks and turtles can all perish if caught in a fishing net. Nets can also be dropped accidentally or thrown away and they drift through the ocean as ghost nets, entangling many unsuspecting marine creatures on their deadly drift. The Prodivers team are actively involved in removing ghost nets from the ocean whenever they are seen, not only for Clean Up the World Day.

As there was not too much rubbish to be collected the team were able to really appreciate the life on the reef. Schools of lunar fusiliers put on a spectacular show darting along the reef, there were many, many moray eels, including two white-mouthed morays and, cruising by in the blue was a grey reef shark.

An enjoyable and rewarding dive was had by all, and, to top it off, 5 small bags of rubbish were collected and removed from the ocean as well.

Well done to the whole Clean Up Team – the world is a better place without rubbish. 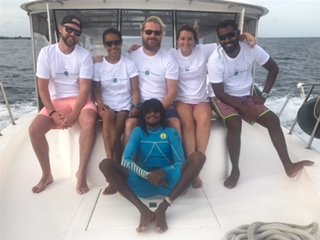