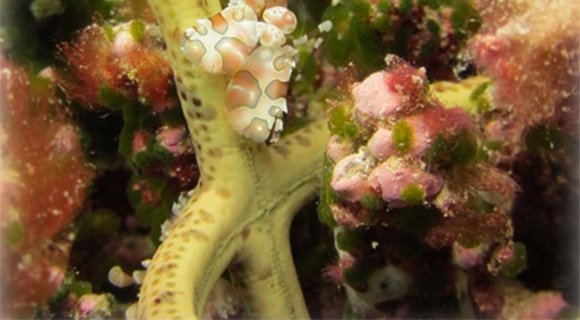 Reethi Giri is a small giri located close to Kuredu Island, somewhere between Kuda Giri and the inner lagoons of Fehengili and Mashura. It is a long giri, not so interesting with the exception of a large coral block at the northermost point, closer to the channel between Kuredu and Fehengeli, mainly known as Kuredu Express.

Josep, Marcel and a few divers from Komandoo decided to have a relaxing afternoon dive on that spot yesterday afternoon. There are hundreds of feather stars, and normally it is easy to see scorpion fish, white mouth moray eel, and a nurse shark is often lying there too.

We had a surprise yesterday when we found two tiny Harlequin Shrimps feasting on a sea star, their preferred menu! Josep spotted them, thanks mainly to the sea star that was in a weird position; otherwise it would have been almost impossible to find them.