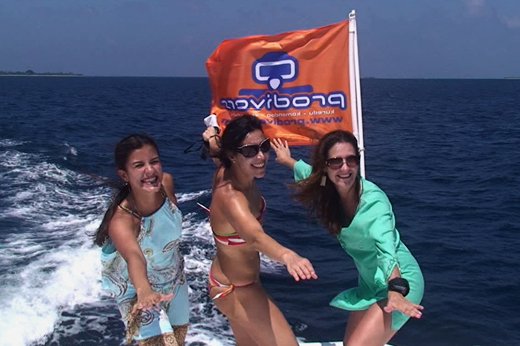 Over 100 divers from more than 6 different countries descended on Kuredu in February as Prodivers was host to a number of different diving groups from around the world!  With the Carnival in Brazil in full swing and the cold european winter hitting its peak, it was clearly too much for some as they escaped to the warm Indian Ocean and to Kuredu.

Between the 13th and 27th of February, the dive center was buzzing with anticipation as to what the day’s diving would have in store.  Needless to say, some great dives were had by all, with countless sightings of grey reef sharks, eagle rays, dolphins (both above and underwater), a mermaid (see below!), majestic manta rays and an endless stream of turtles.  The video highlights from the groups and their dives can be seen in this weeks installment of ‘The Last 7 Days…on Kuredu’.

Prodivers offers attractive discounts and packages for groups visiting any of its 3 dive centers across the Maldives.  If you have a group and would like further information about what we have available, then please drop us an email.

We would like to extend a big thank you to all the divers that we had with us during this time, not only those that were part of the groups, and we hope to see you all again – same time, same place, next year!

The following groups were part of “The Kuredu Invasion” (in no particular order):

Highlights: Finding a frog fish on ‘The Wall’.  Snorkeling with dolphins.

Highlights: 40+ grey reef sharks on Fushivaru Kandu,  & finding a mermaid on a deserted island in the Noonu Atoll.

Highlights: Manta Ray on Kuredu Caves (in addition to the countless green turtles)

Highlights: Dads and kids alike were blown away by the sharks, eagle rays and mobular mantas on Kuredu Express

Highlights: Kuredu Caves and its resident community of green turtles.