We Rescued Two Turtles From a Ghost Net 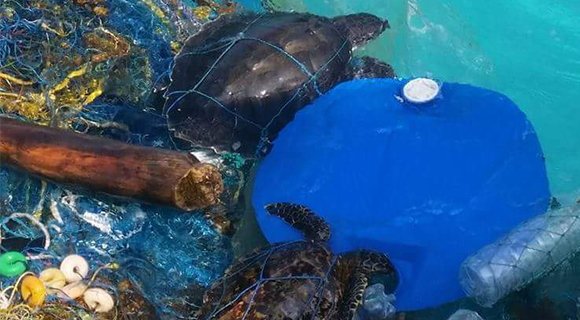 On Tuesday, Jon, our snorkelling manager, earned himself a ‘hero’ title by rescuing two turtles from a ghost net just off the local island of Hinnavaru near Komandoo.

Two turtles, an Olive Ridley and a small Hawksbill Turtle, had become entangled in a ghost net floating in the ocean. Inquisitive turtles are particularly vulnerable to becoming trapped in abandoned fishing nets, because they try to use the net as a resting platform or are attracted to prey such as fish or jellies that are already entangled in the net. At this time of the year, the Maldives sees an increase in turtles needing rescuing: the North-East Monsoon brings in floating ghost nets from the Bay of Bengal and therewith a potential for turtles becoming entangled.

We truly hope that the Olive Ridley Project, which we’re closely cooperating with by providing info on the nets we find, will succeed in increasing awareness of this threat to those who can assist in minimising the problem from the onset.

If you love the turtles as much as we do, you may be interested in visiting the ‘Turtle Airport‘ during your next stay at Kuredu – find more info here, and check the dive shop for Fourth Element’s OceanPositive swimwear, produced from ghost nets.

Last but not least, take a few minutes to watch Olive Ridley Project’s movie, highlighting problem of ghost nets in the Indian Ocean: