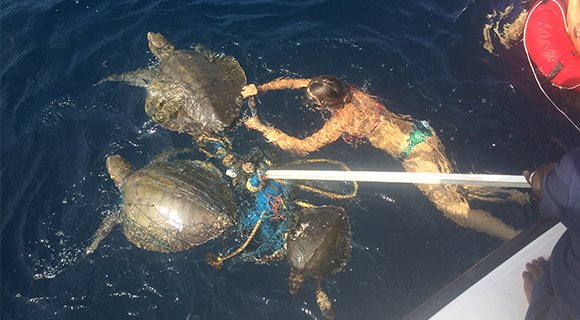 Ghost nets are the silent killers in our oceans, a by-product of today’s commercial fishing industry. Lost or abandoned nets drift though the oceans, carried by the currents and, during their long and aimless journey, marine life gets trapped and entangled leading to suffering and death. The individual nets can often become tangled together with ropes, buoys and other debris to form what are known as ghost net conglomerates.

Since the beginning of this year, Hurawalhi and Prodivers have recovered 5 ghost net conglomerates from the ocean and rescued 22 Olive Ridley sea turtles, with April being a particularly busy month for removing ghost nets:

– 24th February – a ghost net was found washed up on Hurawalhi beach, it had 4 live sea turtles and 2 dead white tip reef sharks entangled in it; the sea turtles were immediately released.

Rescued sea turtles that have injuries or are too sick to be released into the ocean immediately are transferred to Naifaru Juvenile where Atoll Volunteers care for them until they are fit enough to be released into the wild again. Sea turtles requiring more intensive care are taken to the newly opened ‘Olive Ridley Project-Sea Turtle Rescue Centre’ in Coco Palm Dhuni Kolhu in Baa atoll.

All 7 species of sea turtles are on the brink of extinction so the conservation effort of everyone involved is extremely important. The charity Olive Ridley Project actively fights ghost gear in the Indian Ocean; their efforts rely heavily on volunteers and every single person who collects discarded netting, removes a ghost net or disentangles an animal is helping their cause. In addition, ORP relies on marine biologists to collect data on ghost net removal and sea turtle entanglements. This information helps ORP to track down the origin of the nets, as ghost nets drift in from outside the Maldives. ORP has documented 600 recovered net conglomerates since 2014 and 80 rescued sea turtles already in 2017!

Here on Hurawalhi we consider ourselves very lucky to have such a dedicated marine biology center and dive center, which help fight ghost nets and raise awareness about them both locally and on international level, through ORP. Lisa, our resident marine biologist, does a great job in the education of both guests and staff about marine conservation topics – be sure to pay her a visit if you’re on Hurawalhi.

The dive center, along with Lisa, will host Mr. Martin Stelfox, founder and CEO of the Olive Ridley Project from Monday 24th April until Tuesday 25th April; he will join the Turtle Tour snorkeling excursions and give a presentation during divers night in Coco Bar so, if you’re on the island, come along!

No matter where you are in the world, if you spot a ghost net, please report it or, if safe to do so, remove it – you may be preventing the needless harm of endangered sea creatures.