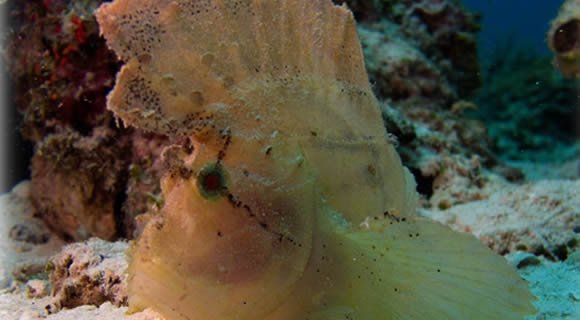 Chubby and round, available in a variety of colours and patterns, the frogfish are incredibly cute. They’re the masters of camouflage, keeping to the ocean floor, blending in with coral or plants, mimicking sea urchins, some even have algae growing on them. They can be so well camouflaged that sea slugs might crawl over them without even realising. They’re a difficult spot – mostly!

But if it’s on the house reef, we find it! Three of our staff found themselves in an enviable position of finding two (!) baby (!) frogfish on the wreck. They don’t like to move too much, so it’s quite easy to linger around and admire them for a while, hoping to get a glimpse of their feeding techniques. The volume of their gaping jaw can be 12 times more than its resting jaw, meaning that water gushes in, sucking in whatever creature in its wake. The water is released through the gills while the animal goes straight into the frogfish’s stomach, which can expand to allow the frogfish to swallow prey twice as big as itself. All this happens in just 6 milliseconds, faster than the eye can see. 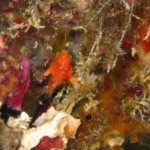 For all its eagerness to remain utterly stationary for as long as possible the poor old frogfish will occasionally have to move itself. Sure, they can flick their tails and swim, but that’s far too ordinary for a frog fish; they prefer to walk on the sea floor. Younger frogfish can also force water out through their gills to make a quick getaway, it’s some sort of a jet propulsion.

All in all, an incredible fish and definitely a spot that’s made the week great. That’s up until the very same divers found a white leaf-fish on the house reef. They too remain stationary, in the vicinity of the same location for many months and often if you find one there will be another one or two fairly close by. We’ll keep you posted how that goes!