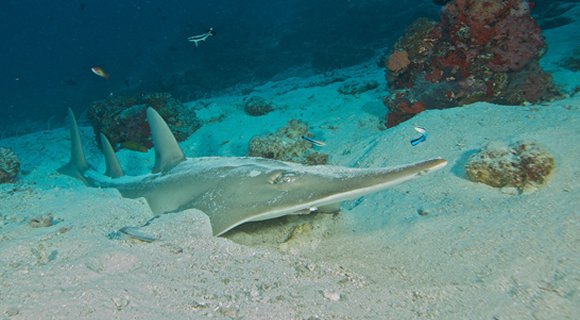 Dozens of sharks, rays, schools of barracuda and jacks help make Orimas Thila a fantastic big fish dive. Acting as a nursery and cleaning station for Gray Reef Sharks this underwater mound will often attract these fish in large numbers, who take advantage of the ocean currents and warm waters. Other species of sharks such as Leopard and Guitar Sharks are also commonly seen on the Thila, where Eagle Rays and Sting Rays also are frequently found.

For a chance to win a free Prodivers t-shirt guess how many guitar Sharks we will see between October1st-October 27th Send us your entries via email. We will announce the winner at This years Dive show in Birmingham, you can find us at Stand PV34

With the site doubling as a nursery many of the sharks seen are juveniles protected by a small number of often very large females. Although many other species visit the site and patrol the sandy bottom, which adds to incredible experience Orimas offers.