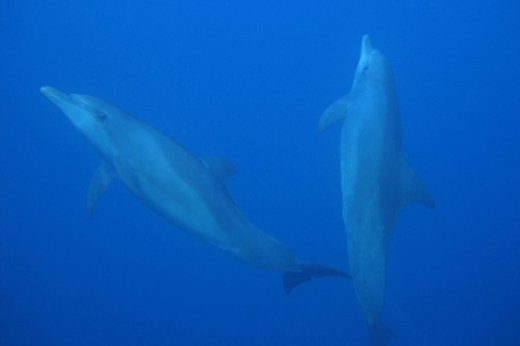 It is not unusual to see big schools of fish at Kuda Rah Thila, which is a protected Marine Park, a mere 15 minutes way from Vakarufalhi.

While watching a school of more than 100 jack fish hunting and causing havoc amongst the fusiliers yesterday, we were already blown away by the National Geographic action taking place right in front of us.

100 jacks darting through the water, fusiliers panicking for protection brought Kuda Rah Thila to boiling point.  Attracted by the noise and commotion, 2 bottle nose dolphins joined the action to get their share of the feast.  For the next few minutes, we watched on in awe as the bottle nose dolphins mingled with the jacks before heading up to the surface, jumping clean out of the water before re-joining the action and repeating their routine a couple of times.  When we finally closed our mouths, the action had died down, but the memory will no doubt come back and be relived for many years to come.