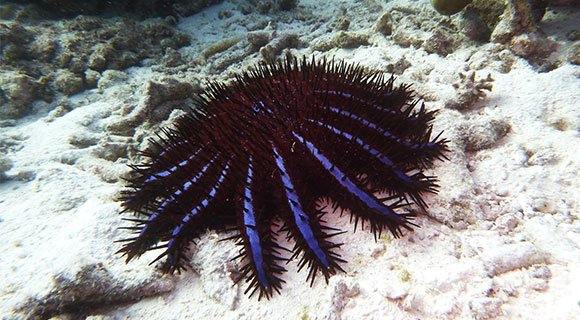 With an ‘all hands on deck’ approach and combined effort from our guest divers and instructors, we successfully removed 92 Crown-of-thorns (COTS) starfish from Hiyama & Bohwa Thila dive sites. We were not expecting to encounter so many, so we will revisit in a few days and remove the remainder.

The Prodivers team based at Lily Beach Resort & Spa had previously removed several COTS from other nearby dive sites, where sadly, you could really begin to see the negative impact that they were having on the reef ecosystem.

COTS is an aggressive coral-eating starfish. Left untouched, it can quickly take over and destroy a reef. It has very few predators, many of which are also few in number, like the Napoleon Wrasse, due to overfishing & the collection of the shells, like the Triton Cone shell, due in part to their rarity and beauty, leaving only a few pufferfish with the massive task of eating them. Personally, we are not sure if the pufferfish find them tasty enough or perhaps there are other more enjoyable things for the puffers to contemplate eating.

In other places around the world, people have experimented with injecting them with poison and cutting them into pieces. Cutting these animals into pieces only causes the problem to multiply, as starfish have an innate ability to be able to reproduce lost limbs. Therefore 1 becomes 2, 2 becomes 4 and so on.

Another method is to use an injection of toxin to kill the COT. This was also thought to be effective. However, the dead COT is then eaten by other animals and microorganisms, which then allows the original toxin that was used to kill the starfish, to enter the bottom of the food chain and negatively affect many of creatures from the bottom up.

These smaller organism are then successively eaten by a natural predator, thus allowing the toxin to progress through the entire food chain, after which man becomes the predator and we are indirectly consuming toxins by directly consuming sea food products. For these reasons it becomes necessary for COT numbers to be more effectively controlled by human interaction. We used homemade BBQ style tongs to remove the prickly critters, being careful not to get stung ourselves. Back on land we bury them one meter deep in the sand. 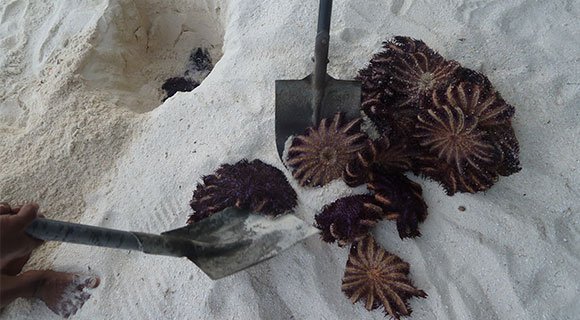