What on earth is that?! 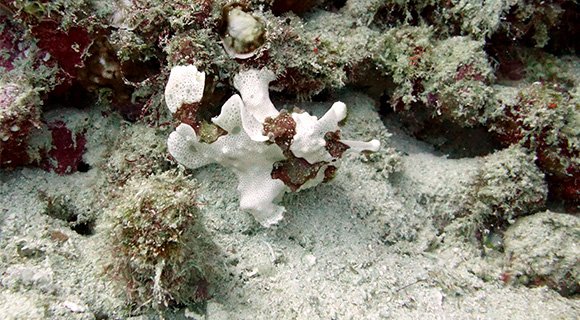 Kudah Rah Thila is one of the Maldives’ most famous and most popular dive sites. Well known in the South Ari Atoll for its incredible reef formation and a staggering amount of fish life, it’s been a firm favourite since diving began in the Maldives.

As Atheef led his 2 Tank dive group around the formations, and as the guests marvelled at the sheer mass of blue stripe snappers everywhere, none of the divers expected Atheef to pick out the small white blob on the reef and turn their attention to something really quite weird. The ‘Clown Frogfish’ or ‘Warty Frogfish’ as is also known is a rare find on the reef and Atheef certainly surprised the divers with this one.

The Clown Frogfish has very distinctive ‘spikes’ on its body giving it a peculiar look. With a lure that it uses to attract food, the frogfish is one of the best hunters in the ocean!

The photo of the Clown Frogfish was taken by Eric Rabin, who was joined on the dive by his wife Stephanie, Andrew, Gianluca, Marina, Valeria and Laura.