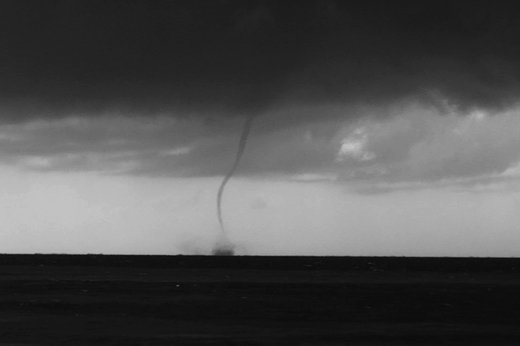 Unable to handle the baking weather and soaring humidity levels, Mother Nature finally blew her top this week with one of the most incredible weather displays we have witnessed here on Kuredu.

The last 3 months has seen both Kuredu and Komandoo basking in some of the best weather the Maldives has to offer.  With calm skies, flat seas and blazing sunshine, even the most seasoned of our instructors were getting a little bit hot under the collar the last few weeks. As the humidity levels continued to rise, the Monsoon was reaching its peak, and it was only a matter of time before Mother Nature hit back and cooled us all off with some much needed rain.

But it wasn’t just rain that came.

As the thunder rolled in and the daytime skies frazzled under the fork lighting, waterspouts started rising up from the ocean.  Tornadoes that form over water surfaces are given the name ‘waterspouts’ and can experience wind speeds of up to 120 miles an hour. The water seen in the main funnel cloud is actually water droplets formed by condensation rather than sea water being ‘sucked’ into the spiraling vortex.

Waterspouts form when layers of cool air blow across water while warm moist air sweeps up from below.

Twirling and blasting their way across the ocean, the waterspouts lasted about 10 minutes before disappearing as quickly as they had formed.  After an hour of venting her anger, Mother Nature once again restored the blue skies and sunshine across the Lhaviyani Atoll.

Check out this weeks ‘Last 7 Days On Kuredu‘ movie for some fantastic footage of the event.